See You on the Mats!

CHECK OUT OUR SCHEDULE
CONTACT US NOW!
STRENGTH IS THE PRODUCT OF STRUGGLE, YOU MUST DO
WHAT OTHER DON'T TO ACHIEVE WHAT OTHERS WON'T

Mike joined a local gym to workout in their fitness program where BJJ was also offered.  After months of watching class after his workouts, Mike finally gave BJJ a try in 2015.  See what Mike has to say about why he continues to train and the benefits it has in his life.

“I would advocate jiu-jutsu because I have personally seen increases in stamina, athleticism, memory, and mental focus. I feel fortunate to train with my team members as well. They have been motivational and supportive. When I was 25 I had a coworker challenge me to start training Jiu Jitsu. It was a busy time in my life. I passed. But luckily a couple of years ago an even more persistent coworker challenged me. I often kick myself for not getting involved with the sport years ago. Do yourself a favor, challenge yourself to check this sport out today!” -Mike Critzer

Christina started training BJJ in end of 2012 and did her first tournament in April 2013. After losing, she became motivated to increase her training and focus more on her fitness, losing over 50 pounds in 3 months. Later that year, her husband Ryan joined BJJ and lost a substantial amount of weight and improved his fitness levels as well.

“Not only do we feel happier and healthier and have a fun hobby to share, but it’s improved our marriage and given us a lot of new friends!” -Christina Myers

“The best thing I’ve ever done for myself and my marriage.” -Ryan Myers 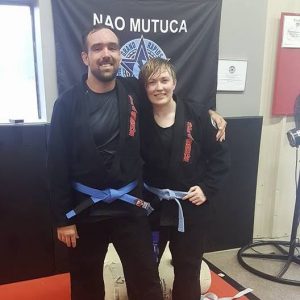 Please contact us at ben@kalamazoobjj.net to get the latest information on pricing for available cross-training membership packages and to sign up. Hope to see you on the mats!

CHECK OUT OUR SCHEDULE
Go to Top